It was not many years ago that the Capital had peacocks strolling through the streets, or homes across the country had families of noisy sparrows nestled in the ventilation gaps in walls. But with fast paced technological growth and advanced urbanisation, the memory of such beauty has faded away – wiped off by high rises and mobile network towers.

An artist’s eye sees it all only with a different approach; when environmentalists and school books are trying to make mankind aware of the increasing cases of animal extinction due to the encroachment of forests and urbanisation, Mumbai-based artist Ashish Kushwaha has a massive message to gift us through his paintings. 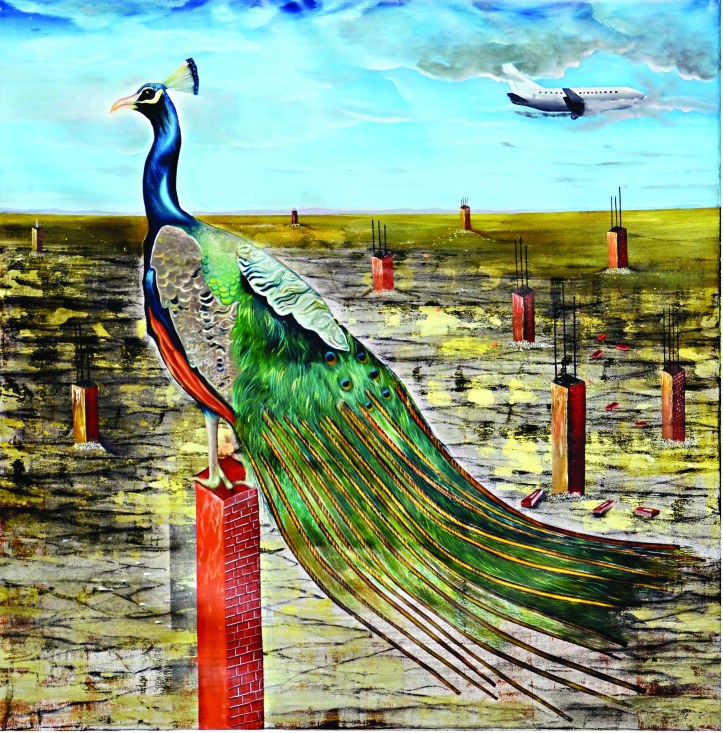 The visions of a glorious one-horned rhinoceros in the midst of an urban background, a colourful peacock whose tail is transformed into cast-iron rods in a construction site, a vulture perched on an unfinished pillar in an area under construction, and a slow vanishing deer behind a pillar will leave one shaken and make them wonder about the gravity of the current situation. 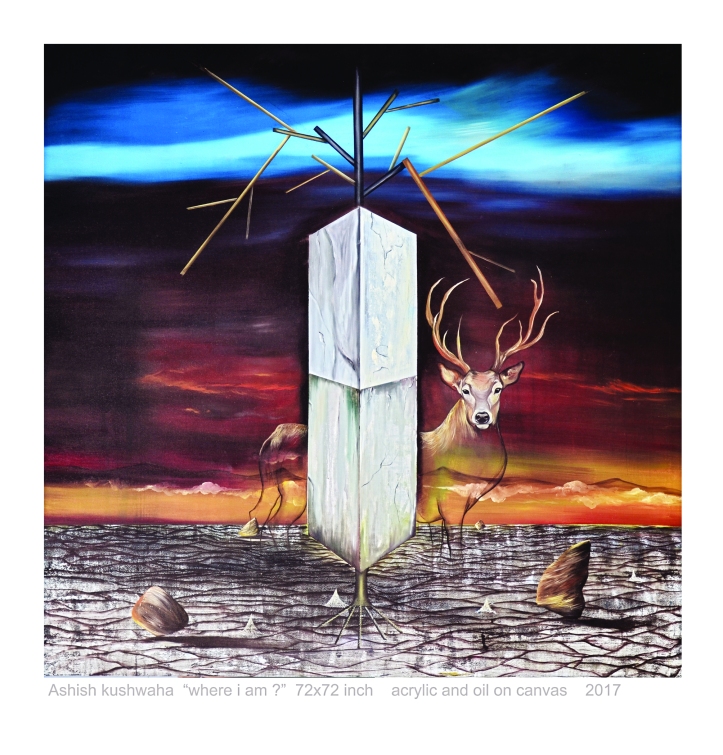 The painting titled ‘Where am I?’ says a thousand words with just the fading appearance of a graceful deer, which is being replaced by a prospective building. Among the ‘Urban Metaphor’ series, one painting which can be really disturbing is a mix-media on canvas, which portrays a headless peacock in a barren under-construction land in the mid-ground. From the neck above, cast iron rods replace its head cutting away all the glory of our national bird, where on the foreground an engineer is at work building a large mesh.

“My paintings are silent conversations,” says Ashish, “I am always thinking of prakriti – of the earth as a planet in which there is harmony between animals and man. But what I see is very different and very difficult for me. When I travel by train from one place to another I am always confronted by the whole statement of exploitation in which man takes away from animals and birds the idea of the habitat.” 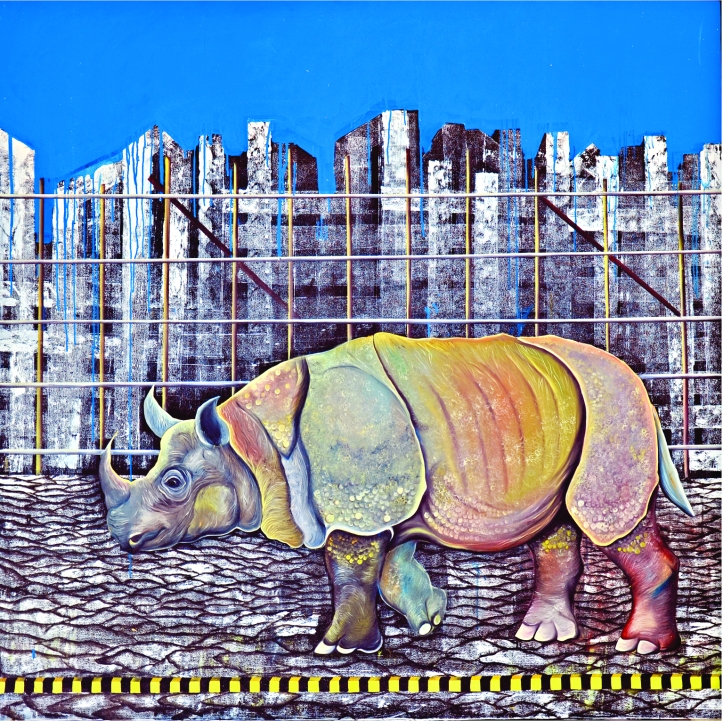 Most of the watercolours portray the evading factor of animals from the metropolitan scenario; the figures are mostly incomplete – either the head or the hind legs have faded away suggesting a gradual extinction. Among Ashish’s untitled works is one striking staircase in a desolate land – stairways leading to nowhere. As a viewer, I’d like to think of it as an indication that extreme urbanisation disturbing ecological balance would lead mankind to a hopeless and dark future. Mocking at their progress the artist’s endeavour is to shout out loud and wake up passive viewers to the everyday ignorance of the fading existence of flora and fauna.

These transformed figures of birds and animals reflect the loss of harmony between man and nature. The Degradation of our planet is replicated in the form of silent stories in his paintings which are protesting against the cruelty and urging man to restore balance back in the environment. 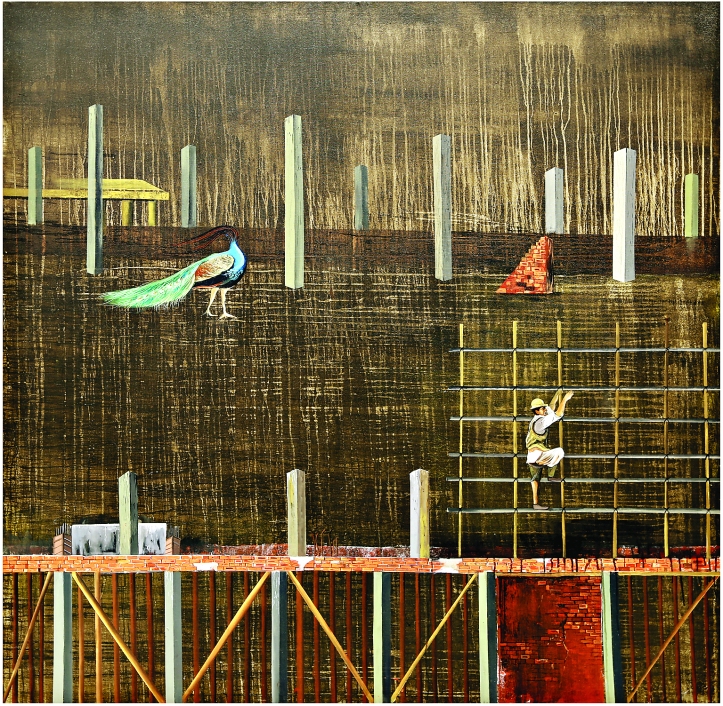 ‘Inheritance of Loss’, curated by Uma Nair, is an ongoing exhibition at India International Centre which expresses the artist’s vision of the gradual disappearance of wildlife due to urbanization. Most of the paintings – watercolour on paper, or acrylic and oil on canvas – have a sad yet powerful message for viewers – are we losing our responsibility to nature in a power paced world of selfishness? The series will be on display until May 29.

There's a different kind of joy, in calling something your own and presenting it to the world with pride. Here's one of my favourite clutches handmade under my brand @the.crochetier
When will I ever learn to pose?! 😶
Ashtami done right... Thanks @drisha.roy.7 @madhabimanjari for the pics 🥰🤗
☺️☺️
Apparently, I koochie-coo my food 😋👻
Subho mahasashti 😃
Fancy some architectural awesomeness? This doorway at Adina mosque is just a glimpse of the sculptural beauty across the monument site. Built in the 14th century by Sikandar Shah, Adina mosque is said to have used material from Hindu and Buddhist temples of the era that the Nawabs of Bengal had plundered. One can find sculptures resembling temples here. There's a sculpture of Ganesh on one of the walls which unfortunately I could not locate during my visit.
Social distancing please 🙏
Chilling by the pool 🥰
#throwbackpic ❤️
Queen vibes 💐
Luchi aloo dum 😇
Loading Comments...
%d bloggers like this: