Healthy eating comes at a price

Health has always been of utmost importance to us civilised social beings, but have you thought how it all comes at a price?

What is going on:

Foods like bajra ki atta, makkai ki atta, flax seeds, sattu – things considered food for the poor is gaining utmost importance with the affluent fitness freaks across the country. They are finding their way back in the menu of fancy restaurants across metro cities at high rates. From everything being white to everything becoming brown, now is the new time to consume all the black stuff which were once thought to be not of good standard. Brown rice, Brown bread, brown sugar – things which are supposed to be cheap for less tedious packaging procedures and low manufacturing costs, are sold at higher prices wrapped in the labels of expensive brands.

Now, many would claim that their nutritional value is high therefore they cost more – but their nutritional value had always been high, they did not suddenly evolve in the past decade. What caused them to become expensive is marketing. Convincing someone to buy something for the sake of the brand’s sales is known as the art of marketing! (wink) – It’s all about creating a want so that they can sell something new. It happened back a century and it’s happening now again.

These brown stuff are indeed nutritious and had been used in desi cuisine way before the western countries laid an influence over Oriental culture. “Items like flax seeds, bajre ka atta, lotus stem flour, mixed atta etc were very much part of regional Indian cuisines. Over the course of the past two centuries somehow in our belief that everything Western was good, we started following their ways and used bleached flours and cereals. Flax seeds were so common and cheap in our country that it was fed to cattle. We somehow lost the plot and now again are aping the West to follow their latest trends and fancy restaurants have included these items in menus and selling them at higher prices,” said Rohit Tokhi, Executive Chef of a leading luxury hotel in the Capital.

Quinoa is a South American cereal like our very desi dalia, it was considered food for the poor for its high protein content and undemanding and altitude-hardy nature. Now quinoa is flooding the F&B market in India and is quite expensive (since it is being imported).

“When the poor had nothing but these to eat, the privileged tested their systems with rich oils, nuts and spices,” says Ashish Joshi, Executive Chef of a leading luxury hotel in the Capital. Eventually, after observing for several years people came to a conclusion that since the poor’s diet consists of a massive amount of carbohydrates and since they are into extensive physical activities, they tend suffer from diseases less than the privileged.

It took generations for people to realise that they were actually spending money in spoiling their health with rich food, then spending more on medicines to cure the diseases or later on joining gyms to shed those extra kilos they gained from the fatty food they have been ingesting for years.

Cut to the present – a new fad has won over the crowd of eating healthy and doing everything possible to keep a check on one’s weight and overall health. It is not a bad idea to be health conscious, but what is happening here did not come out of the blue. It has been planned and marketed by lobbyists all the way along, and the top marketing moguls did their homework well. To promote low-cost products and raw materials in shiny packages and sell them off at a cost several times more than their actual price is a clear example which provides evidence that we always, always tend to follow the West no matter what. The indigenous culture is ignored to death until revived by a white researcher/scientist in some part of Europe or America. A classic example would be yoga. The commercialisation of the meditation and recreational art form happened only recently when the West had become obsessed with its benefits.

Lobbying sponsored by industries for years:

Similarly a few years back olive oil was introduced to the Indian household kitchens all over the country but the side effects of consumption of extra virgin olive oil was not brought to the forefront. Olive oil is a rich source of monounsaturated fat, even though it adds taste to your food, it is equally unhealthy when consumed in high proportions as it is high on calorie and causes trans fat related diseases, lowers blood pressure and blood sugar, it may cause painful gallstones owing to too much consumption. Even though the oil has fat content and is not indigenous to our country, marketing strategies planted the idea of healthy eating through olive oil which is also very expensive. Agreeing to the said notion, Chef Rohit Tokhi said, “Also most of the olive oil sold in our country is actually more than 70% vegetable oil and rest is olive oil. Also essence and colour are used to get the flavour and shade. It is much better to use locally produced mustard oil or coconut oil.”

Back in the early 20th century the same lobbying happened in favour of sugar, putting all the blame on fat. The message that fat consumption leads to heart diseases was widely spread by the sugar industry bamboozling Americans. When one consumes more sugar than the body can process it is stored as fat, and sugar responsible for both heart diseases and obesity. 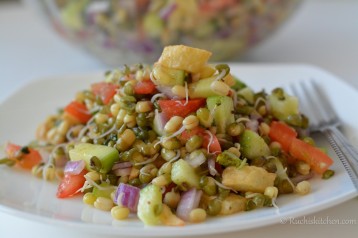 Sprouts, which can be grown at home from raw legumes soaked in water overnight, is the most cost-effective way to consume healthy food, but television cookery shows and health columns by various nutritionists inspire people to buy them from stores for a much higher price. Eating healthy is not the message that they are spreading, but a pseudo-caring attitude towards their customers benefit the marketers around the country to sell off material for skyrocketing prices. Food items like rocket salad leaves and sprouts which can be home grown and are not pricey are used in salads served at a few hundred per plate. (Stores also sell sprouts in packages, like they sell eggs charging the customer double.) When asked if companies are injecting the idea of leading a healthy lifestyle through their pricey food products, says Chef Rohit Tokhi, “Yes it is true. They are just using our hectic lifestyles as an excuse to sell these items to us. As we are too lazy to experiment these things at home.”

Avocado is now gradually carving its way into the healthy eater’s plate. It is being introduced into various salads and sandwiches across restaurants; the fruit is imported and costs about 200/- per Kilo. Every geographical region on the planet has its share of healthy elements to provide nutrition to life form, therefore, a judicious decision would be to stop aping others and eating aboriginal and seasonal vegetation. “When one hears of the impurities in the so called processed food, or encounter’s the high prices, the thought of growing vegetables in the balcony does come to mind,” expressed Manisha, a restaurant frequenter.

The point of this article is to aware people of the strategies being used to extract money out of their hard earned savings. Investing in a healthy diet is an exceptionally good step but losing out on the facts and spending more than required is not.

#throwbackpic ❤️
Queen vibes 💐
Luchi aloo dum 😇
Call of the wild...
Beautiful mist-clad roads in Munnar reminded me of Darjeeling...
Green is my new favourite colour...
When was the last time you admired the food kn front of you the way I am looking at this lovely icecream bowl?
Yummy things!
Vintage love ☺️
Oh the joy of stepping out after months!
How I miss those days, when traveling was just a ticket and a journey away... With this sweltering heat killing me slowly all I wish is to take dive in the Andaman sea and swim along with the pretty shoals of fish ❤️
Protein laddoos 😋
Loading Comments...
%d bloggers like this: