“Tiger cubs become independent when they are about eighteen months, but it is not until they are around two to two-and-a-half years, that they fully separate from their mother, and gradually start to move out in search of their own territory,” informed Rajesh Kr Dwivedi, our safari guide, as we rode into the dense forest of the Tala zone in Bandhavgarh National Park, for an adventurous gypsy ride. 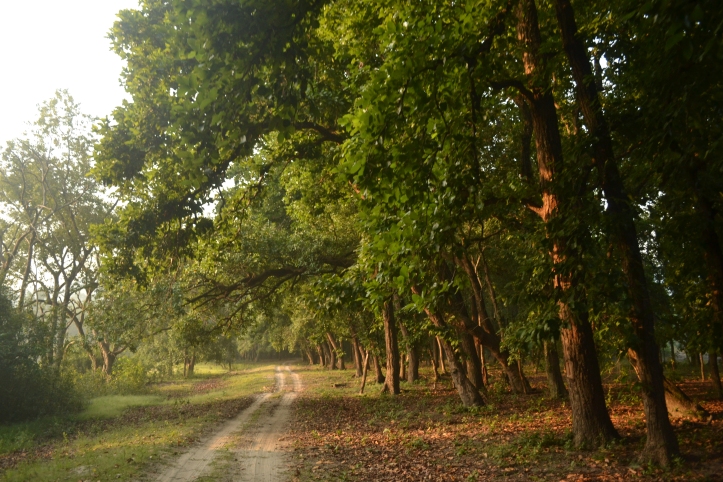 The national park is famous for treating its visitors with innumerable tiger sighting. With maximum visibility during the summer, the area boasts of 71 resident tigers, informed Ravi Pathak, safari driver. Bandhavgarh, in Madhya Pradesh, is one of the most invigorating places to be for a naturalist and a photographer. It is not only famous for the alluring presence of the majestic Bengal Tigers in the forest, but also the quietude ruling the area. Situated in the heart of India, Madhya Pradesh holds multiple awe-inspiring sights across the state for tourists to indulge in. But one of the most important reasons for the thriving tourism population is a large number of tigers that seem to call out to photographers, and wandering souls, over and over again. 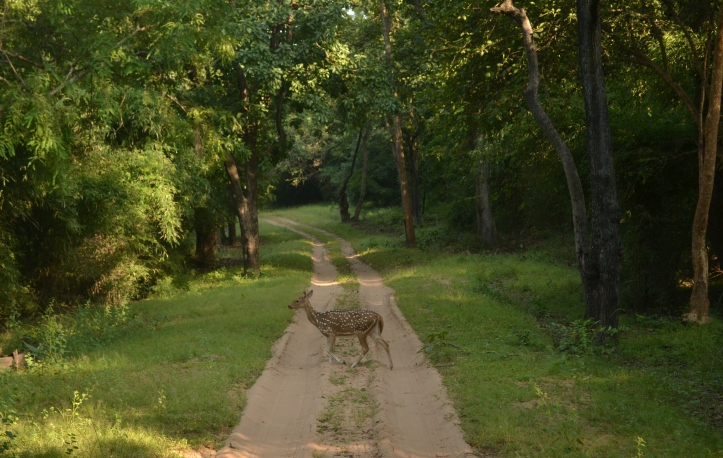 Bandhavgarh is divided into three zones for its two-legged visitors, while the oblivious four-legged ones care not an ounce about zones: Tala, Magdhi, and Khitauli. The first zone is best known for tiger sighting.
With safaris planned twice a day, visitors packed with enthusiasm and wrapped in jungle-print shirts and caps, set out for an adventure in the hope of sighting the king of the jungle. Some return with a wide smile on their face if they had been lucky to cross paths with a tiger, while some return slightly disappointed for not sighting the big cat. Even though one does not get to see a tiger, the very liberating presence of the calm, green and fresh air will motivate one’s mind and body. 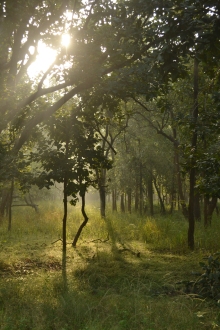 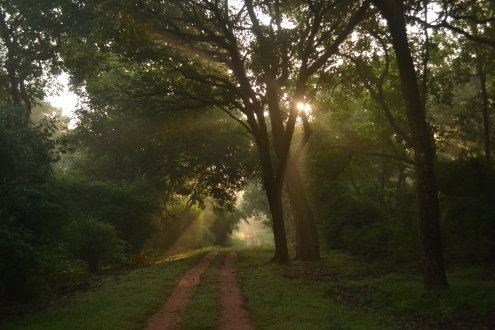 The road ahead, Bandhavgarh, Madhya Pradesh
An early morning safari following the gypsy trails into a dark forest, with the gradual enlightenment of dawn, is a scene out of a fairy tale. When fluttering butterflies race with your gypsy, or a magnificent antler sambar deer hops away into the bushes to hide from an audience, you know you’re having one of the best times in your life. You might have spent four to five hours before you know it, roaming in the jungle surrounded by the smell of moss, rustling leaves on tall trees and gorgeous birds flying high. Even though it is the Bengal tiger which gets all the attention, the forest is home to several other animals like the spotted deer, barking deer, sambar deer, langur, gaur, sloth bear, multiple pretty birds and innumerable colourful butterflies. 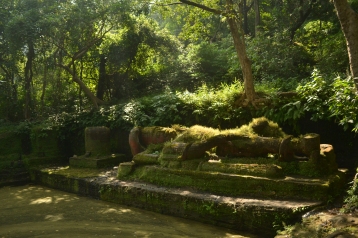 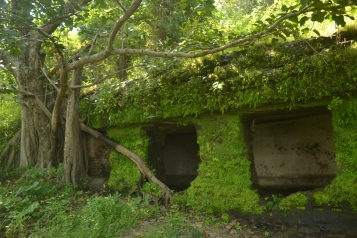 Remians of horse-stables, Bandhavgarh, Madhya Pradesh
Bandhavgarh derived its name from a hill in the Tala zone, that was once a ruled by the Maharajas of Rewa. Climbing uphill in a safari gypsy, one will still find the moss-covered horse stables of that era, the king’s court and a very interesting piece of art – a 35 foot long idol of Lord Vishnu known as ‘Seshshaiya,’ and a large Shivling by a small pool fed by the seeping waters in the hill coming down from a few rainfed lakes at the top. It is said that the statues were carved out of one single stone each! The beauty of that moss green on the dusky rock is any aesthetic soul’s delight. Regional folklore suggests that Bandhavgarh Fort was constructed by kings of the Gond Empire who constructed 12 ponds, of which only a few remain. But the Bandhavgarh Fort derives its name from the most prominent hillock of the area, which is believed to be given by Lord Rama to his brother Lakshmana to keep watch on Lanka; Bandhavgarh (bandhav stands for brother, and garh for fort). 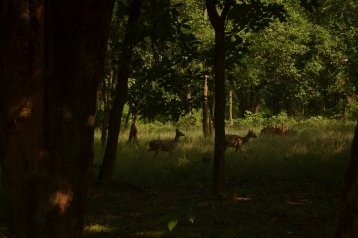 Waiting, Bandhavgarh, Madhya Pradesh
Most people are aware of how tigers mark their areas by urination, a lesser known act of claiming a territory is by engraving scratch marks on the barks of tall trees. When a tiger stands up on its hind legs to scratch on a tree, its aim is to reach as high as possible to disable competition. “When a younger or a new tiger comes in the area, they must challenge the existing ruler by trying to reach above the already engraved scratch marks. If he succeeds marking higher than the current tiger, he growls and calls out for a challenging fight which will finally decide the fate of the two. In most cases, it is a younger tiger, between the age of 5-10 which challenges an elder and eventually fights and become the next ruler of the territory. Upon the call of challenge, both tigers get into a dangerous fight, which either gravely injures or kills one, enabling the other to claim the prize – the large territory, the tigresses in the sub territory and their cubs. If the cubs are too young, the new king kills them to establish his own line of descendants,” informed Dwivedi, winner of The Billy Arjun Singh Memorial Award for Best Wildlife Guide in 2010. 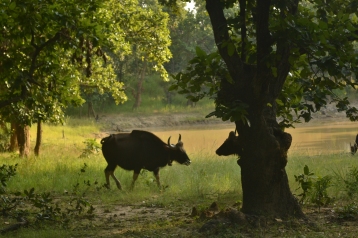 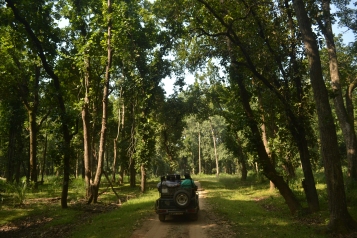 Safari ride, Bandhavgarh, Madhya Pradesh
During my first safari, I was quite confident to get a glimpse of one of the famed tigers of Bandhavgarh, but hours passed on, and my confidence seemed to vaporise, especially when we came across a couple of lucky tourists who caught a glimpse of a tigress there. Fate hadn’t been so unkind, and with some patient waiting, we tiger-enthusiasts got to see not one, but two magnificent tigers. As the guard informed, the animals in the forest were used to empty roads, with no humans barging into the forest to click their photographs, so they were shying away trying to avoid human contact (the national park remains closed for during monsoon, and we took one of the first safaris after it reopened). Therefore, even though we saw a couple of tigers from close quarters, they were too snob to simply turn their back on us disabling us to admire them for too long. It was as if the tiger said, “No, I’m not posing for you guys, I need some privacy,” turning away from us seconds after it came into view. 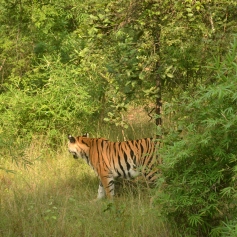 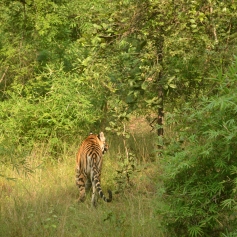 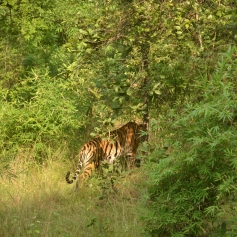 The mere fact of the tigers granting an audience was overwhelmingly blissful and made my visit to Bandhavgarh a fruitful one. One might not be as lucky to sight a tiger at the very first safari, but one can always try, morning and evening! The national park is open around the year except for monsoon, June 15 to September 30, a time most dreaded by the guides and safari drivers. 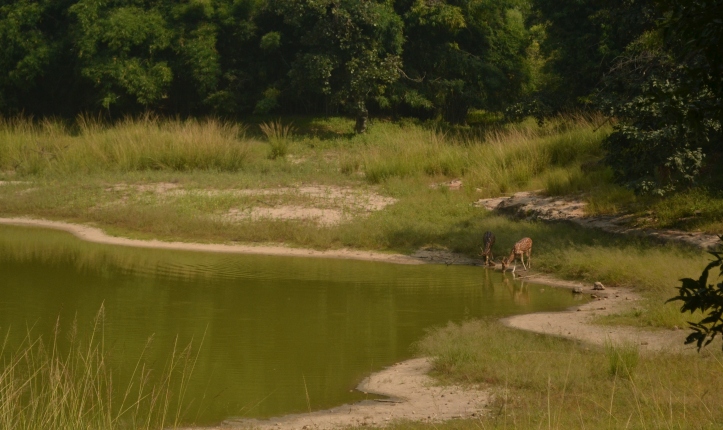 Bandhavgarh is the definite place to be, for those who seek an adrenaline rush during their vacation, and those who enjoy being part of the natural biosphere.

The entire ambience of the place hit the right chords in my mind and I couldn’t help but hum this song throughout my stay there:

How I miss those days, when traveling was just a ticket and a journey away... With this sweltering heat killing me slowly all I wish is to take dive in the Andaman sea and swim along with the pretty shoals of fish ❤️
Protein laddoos 😋
Happy international tea day!
উফফ কি গরম!
Quaint cafe with the perfect company ☺️😘
Food, oh glorious food!
But first we eat #lunchgoals
Be happy, it drives those around you crazy! 😉
Apparently, I have an affinity towards high places
What makes you really happy?
Look for the magic in every moment 😃❤️
😎
Loading Comments...
Comment
×
%d bloggers like this: